Oh. My. Lord. I just discovered that Rick Bayless has a television show. Where he cooks incredible Latin food. For 30 minute segments.

If you don’t know who Rick Bayless is, well then you’re not eating enough (or obsessed with) Mexican food.

I attribute this obscure find to the History Channel special “3 Night Event!” of the Hatfield & McCoys. And Stephen’s dad. I don’t watch a lot of TV. And by that, I mean on the actual TV. I’m a netflix junkie. I like my television shows portable (by way of laptop) & with back-to-back episodes. SO. Stephen’s father loves shows about cars.  And antiques. Thus, I was introduced to American Pickers over Memorial Day weekend. In between every 10 minutes of American Picker footage was a 3 minute homage to the Hatfield & McCoys spectaculAR. So I just HAD TO watch it when it premiered Monday night to find out whether it was gold or shit. And I was sucked in to watching episode 2. And 3. Upon searching the television guide trying to find the History channel in order to DVR the second episode… to fast forward through the HEINOUS overload of commercials, of course… I stumbled upon the mighty random Live Well Network featuring a show called “Mexico: One Plate at a Time“. My reaction went something like “Mexican Food?…. Why yes, I think I will.” Then I read the “info” and found that a man named Rick was going to prepare some common Mexican street food (or something). RICK? Could it be Rick Bayless?!?! So I tuned in. And fell in love. And set out to record every episode for the next week.

He made this kickass looking Adobo Sauce and when I decided to make stuffed peppers this morning I knew I should change it up a bit. Cumin & Chili Powder are great but I needed something different. Something special. Something RICK BAYLESS makes. I tried to replicate the recipe but I couldn’t remember the proportions so I did as best I could.

Okay, I’m obsessed. But if you love (and I mean deep in your bones – want to eat it every single meal – LOVE) Mexican food, then you should be too. 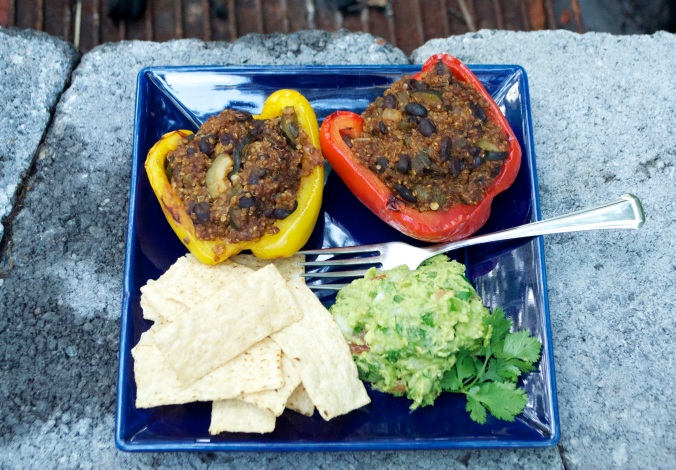 Cut open the ancho chiles and remove the stem & seeds. Over medium heat, toast/fry chiles in olive oil by pressing flat on both sides. In a large bowl submerge chiles in 1 1/2 cups of water. Cover with a bowl or plate to help them stay submerged. Let soak for about 20 minutes. In blender, combine chiles and their soaking water with the remaining ingredients. Blend on high until mixture is smooth. Strain through medium strainer to remove any extra seeds or large bits of chile skin.

Preheat oven to 450F. Roast the poblano, rotating until skin is mostly blackened all the way around. Let cool a bit before removed seeds, ribs & stem. Dice for the mixture.
Lower oven temp to 425F. Cut bell peppers in half lengthwise & clean out stems, ribs & seeds. Bake in oven while you’re preparing the filling. This is a bit of a time-saving tip. When the peppers start to brown, remove from oven. They should just be golden on the edges.
Over medium heat in a medium-large pot, sauté onions, jalapeño & zucchini in oil leftover from light frying the chiles for the adobo. When the onions just begin to brown add the poblano, garlic & tomato. Combine & let cook for a couple of minutes.
Add black beans & quinoa and stir to combine. Add enough water to just cover. Cover pot & bring to a boil to cook quinoa. About 10 – 15 minutes.
Lower heat & add canned, minced chipotle and adobo sauce. Stir to combine. Salt to taste.
You want your mixture to be nice & moist for the oven. Add more adobo sauce to taste/moisten.
Fill peppers to the brim with prepared mixture and return to oven for about 15 minutes.
Remove  from oven & squeeze fresh lime juice over each pepper.
Serve with homemade guacamole & extra adobo sauce & Mexican hot sauce (preferably Tapatío).
And perhaps a glass of nicely chilled dry white wine ; )
Absolutely delicious ❤ And filling : )